The Office of the President is charged with responsibly and effectively carrying out the duties and mission of Howard University. 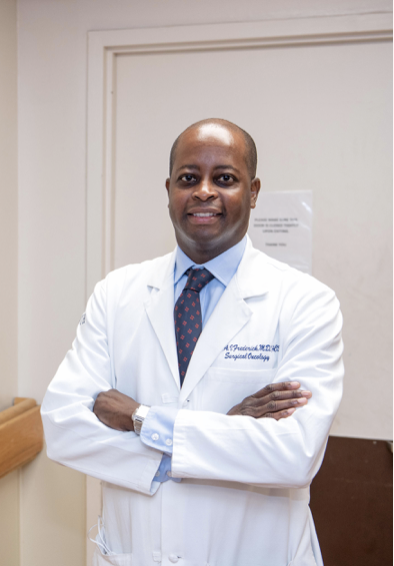 As a dedicated and conscientious steward of the institution’s resources, the occupant of the presidency must elevate this historically Black college and university to new heights of relevance, impact and service to our local, national and global communities.

Born in Trinidad and Tobago, Dr. Frederick came to the United States for the first time in 1988, when he matriculated to Howard at the age of 16 to pursue a dual B.S./M.D. program. By the age of 22, he had received his Bachelor of Science degree and graduated from medical school. He also returned to Howard as a student to receive his MBA in 2011.

As president of Howard, Dr. Frederick has worked to strengthen internal operations in order to enhance the student experience and position the University to more effectively serve the community. He has overseen a period of immense growth and transformation at Howard, including record-breaking enrollment numbers and philanthropic donations. (Learn more about his presidential priorities and the Howard Forward Strategic Plan.)

“Our students don’t come to the Mecca to get a degree – they come here for an education, an experience that awakens their purpose in life. Our students, faculty and alumni are more than leaders; we are more than visionaries; we are more than missionaries. Howard summons, molds and disseminates community-shapers, history-makers and world-changers, whose impact is measured not by the headlines we make, but by the truths we reveal and the service we provide. At Howard, excellence is not the exception – it is expected.”

Dr. Frederick also devotes his time to speaking and writing on the biggest challenges confronting our society. He is a tireless advocate for social justice and a sought-after perspective on the issue of diversity, equity and inclusion. He uses his voice and his expertise to champion the need for greater access and opportunity for people of color in health care, higher education and society at large.

As the president of a historically Black college and university (HBCU); as a cancer surgeon and expert on health care disparities; and as a veteran administrator of higher education, Dr. Frederick was uniquely positioned to serve as an institutional, local and national leader during the unprecedented times of the coronavirus pandemic. He continues to provide an influential voice and guide critical actions directed at confronting all three crises – health, economic and social – that our country is still facing.

Dr. Frederick also volunteers his time by serving on the boards of numerous institutions and organizations, including the Federal Reserve Bank of Richmond, the U.S. Chamber of Commerce and Humana Inc. Dr. Frederick is also a member of surgical and medical associations, including the American Surgical Association and the American College of Surgeons.

Above all, Dr. Frederick is a devoted husband and father. He resides in Washington, D.C. with his wife, Simone, and their two children, Kirie and Wayne II.

We must rally together to support all those in our community affected by Mr. Nichols’s death, & one another in gene… https://t.co/BJDfO7dZ6v

Want to request a meeting or speaking engagement?